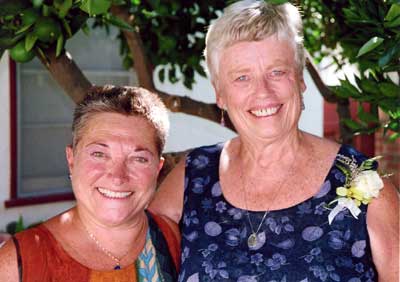 Arleen Lorrance and Diane Kennedy Pike are well-known as masterful teachers, personal coaches, and consultants. They have worked across the continent addressing major conferences, leading workshops and intensives, appearing on television and in radio interviews. They have hosted their own radio show, Inner Connections, dialoguing each week with well-known figures in the world of consciousness development. Their deepest work is with small groups and individuals.

Lorrance and Pike are co-directors of

They are the principle teachers and facilitators
of the programs offered
by Teleos Institute.

They are specialists in transformational processes:

designers of programs and processes focused on the alignment of inner awareness with outer action, the development of congruent conscious behavior, and the activation of purposeful living;

educators devoted to the embodiment of wisdom;

authors of books and articles on identification with the True Self and development of the power to observe and direct personality expression.

On Wednesday, May 18, 2005, The Arizona Republic ran an article entitled ďDiane & Arleen: Soul Mates Share Bond,Ē by Barbara Yost as part of an ongoing series on relationships. This particular series focused on how couples met.

ďSometimes love calls for a vocabulary that hasnít been invented yet.

ďIn 1971, Arleen Lorrance was working on her masterís of fine arts degree from City University of New York when she began a series of five paintings. The actor, poet and photographer says she found a face taking shape on the first canvas, something more skeletal than concrete.

ďIn each subsequent painting, the face took on more detail until it was recognizable in the fifth as a woman with full lips and blond hair. A psychic friend told her that it was a woman she loved, that they would one day work together and that the woman in the picture was Arleenís Ďspiritual godmother.í At the time, Arleen was moving with her husband to San Diego from New York to attend a workshop at the National Center for the Exploration of Human Potential.

ďAt one of the workshop sessions, she felt drawn to one of the participants and found herself inviting the woman to see her paintings. The womanís reaction when she saw them: ďMy friend Diane needs to see these paintings.Ē Arleen responded, ďYou mean Diane Kennedy Pike?Ē

ďArleen had just read excerpts from Pikeís book Search: The Personal Story of a Wilderness Journey, which chronicled the disappearance and death in 1969 of Dianeís husband, Episcopal Bishop James A. Pike, in the Judean wilderness. Arleen had never met Diane and had no idea she was living in Santa Barbara, California.

ďThe woman of the workshop persuaded Diane to view Arleenís paintings. They both realized it was Diane in the pictures. When Arleen and Diane met, Arleen says, ĎMy heart opened. I loved this person.Ē It would be only one of dozens of coincidences that have marked their long friendship.

ďIn 1972, Arleen and her husband parted ways. She wonít call the amiable break a divorce, but rather a ďsuccess completed.Ē Arleen and Diane, now 67, formed a partnership beyond friendship. Itís a love match, yet platonic. From the beginning, people assumed they were gay. They explain theyíre a same-sex couple without the sex. Theyíre frank about their bond, Arleen says, hoping Ďto open people to this kind of union.í But theyíve given up trying to invent a label.

With so many women delaying marriage or never marrying, Diane says, ĎI think this is a possible relationship of the future.í

ďArleen and Diane have lived together in Scottsdale for 12 years and run the Teleos Institute, an association that teaches self-awareness and unconditional love.

ďThey share a home, finances, domestic chores, a love of tennis and their taste in men, although neither dates anymore, finding most men they have met lacking in spirituality. They have named each other as beneficiaries and exchanged powers of attorney.

ďAlthough theyíre polar opposites Ė Arleen is the short one from a nonreligious Jewish family in New York; Diane is the tall Midwesterner whose family was religious, loving, and close-knit Ė Diane says, ĎI feel completely like sheís my partner. . . . We experience being in a union the way married couples talk about a union.í

ďĎWe share it all,í Arleen says. ĎI have affection, I have caring. Iím not left wanting for anything. I wake up every day asking, ĎWhat did I do to be so blessed?í